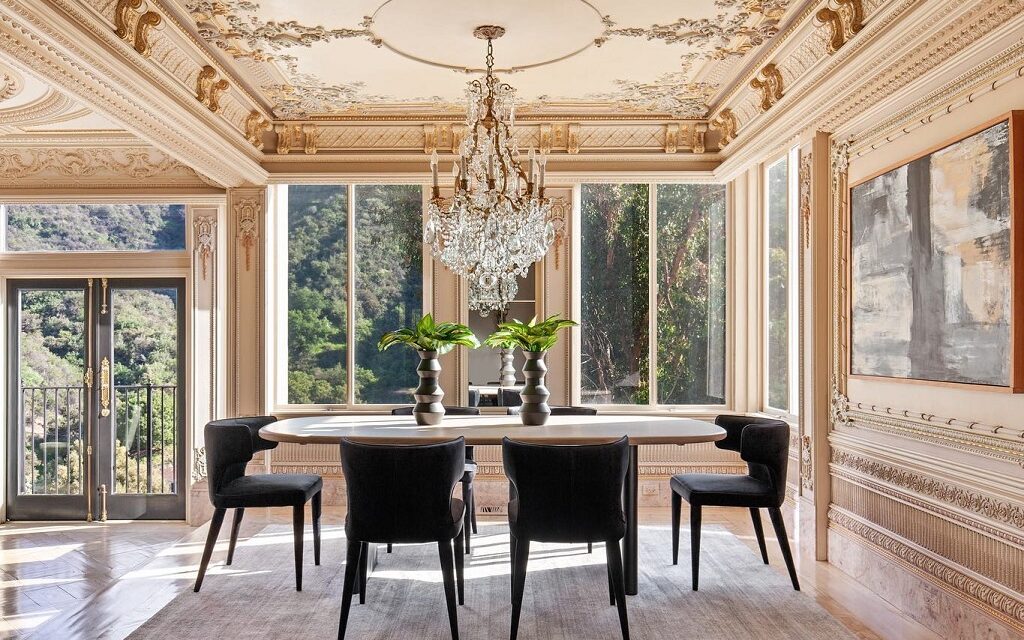 The main photo is courtesy of Engel Studios.

While touring open houses, we became interested in Ornamental Design, which is the art of adding elements to structural form for embellishment or decoration. Of the many homes we have toured, perhaps the most opulent example of this design practice is a residence once owned by Lenna Tyler Kast in Glendale, California, known as Villa Bel-Ami. Here’s what we learned.

We recognize that many homeowners who are not in the market may be hesitant to attend open homes in their neighborhoods, due to not wanting to be surreptitiously classified as “lookie loos”. However, open houses serve as great opportunities to learn about architecture, design styles and building methods of local properties, as well as the history of homes and their past residents. Some homes may even serve as “living design museums”.

Video courtesy of The Vancans Group, the listing agent.

What is Ornamental Design?

Ornamental Design is the practice of applying decorative elements or embellishments to architectural structures, such as: doors, mantels, walls, ceilings and exterior surfaces.  This is accomplished by using molds to create design compositions of plaster or concrete that can be affixed to interior and exterior structures.

This practice has its history going back to the days of the Greeks and the Romans, and flourished throughout Europe during the 17th century and into the first half of the 18th. The French Baroque style is the essence of this design technique and is the most common example of ornate design seen in homes and hospitality venues across the United States.

The primary purpose of ornamentation is to add additional detail to objects, both interior and exterior, to make them more interesting, through unique personalization, elegance, and multilayered composition. 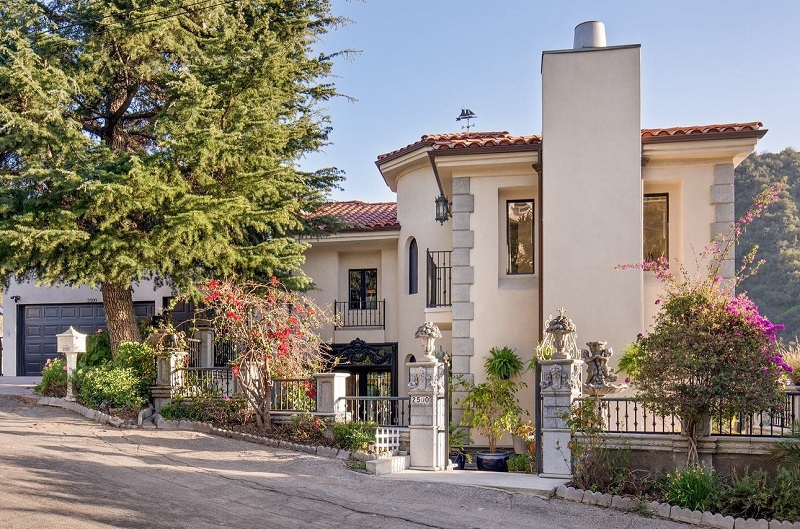 Lenna Tyler Kast is renowned in the architectural world for her many iconic ornamental designs on properties, such as:

Having been one of the leading authorities on the use and methods of ornamental design in architecture, Ms. Tyler Kast is an early, modern example of an iconic power woman in an era and industry once dominated by men. 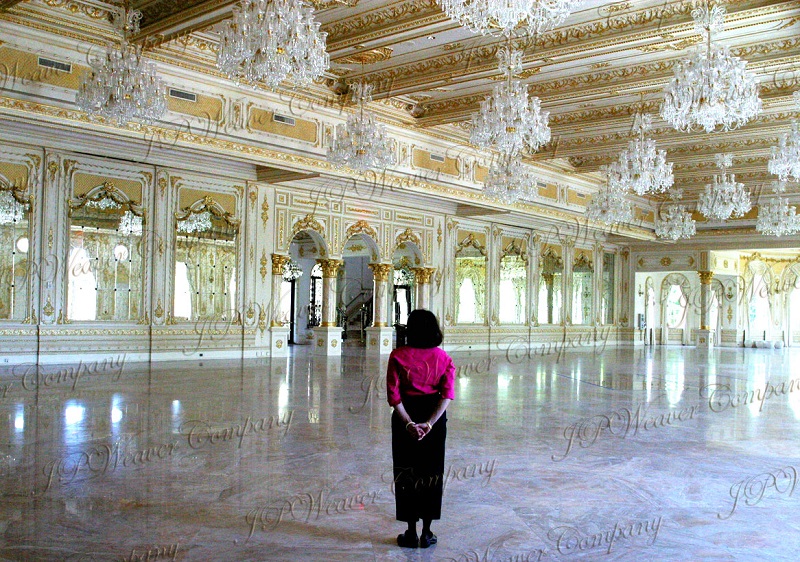 Lenna Tyler Kast viewing her work inside the main ballroom of the Mar-a-Lago Club.

Born in 1930, in Los Angeles, California, Lenna Ptitsin found her calling after graduating from UCLA, with concentrations in drafting, drawing and the arts. It was an ornament serendipitously encountered in San Diego in the mid-60’s that pivoted her life from “just a Glendale housewife” to a visionary icon in architecture. Lenna’s “ornamental epiphany” made her realize that this specific design craft was her fate, which would permanently change the trajectory of her career and life.

As she became a frequent customer of the JP Weaver ornamental design showroom in Los Angeles, Ms. Tyler Kast developed her knowledge, skills and design philosophy beyond what others in the design industry were doing at that time. 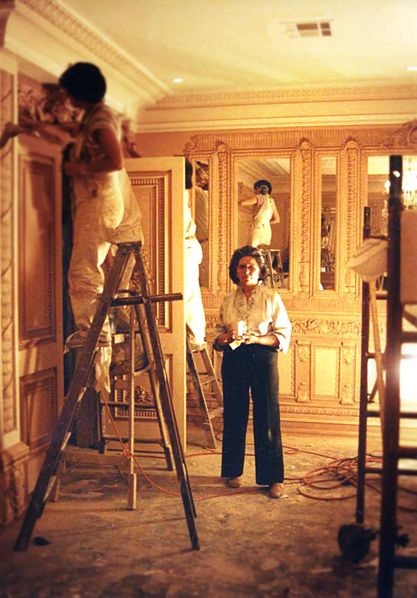 JP Weaver Company, a maker of fine interior architectural moldings designed and crafted in the United States, has been in business since 1914. During the first several decades, the company primarily served an affluent Hollywood-centric customer base with grand homes and commercial spaces.

The demand for ornate grand design installations eventually waned, leading to a period where the majority of customers tended to buy their products and services to create elegant and expensive, embellished picture frames. Few customers, and even designers, had a creative understanding of the full design potential of what the company could offer.

Meanwhile, always the visionary, Lenna had ambitious plans for using ornamentation for loftier applications, learning every aspect of the art along the way. During this period, one of the owners of JP Weaver saw her as a kindred spirit, which eventually led to her purchasing the business in 1979.

While at the helm of JP Weaver, Ms. Tyler Kast grew the business well beyond ornate picture frames by sharing her knowledge across the industry internationally. This new business model fostered new trade partnerships and mentored trusted practitioners of the craft.

Armed with a resourceful business sense, Lenna gave classes on ornamental design on the weekends, to finance expansion plans in order to create the company’s first catalog and to advertise in upscale magazines such as Architectural Digest and Veranda.

As a result, Lenna had intuitively – and perhaps unknowingly – created an informal version of keiretsu, an interconnected virtuous cycle, where she helped a new generation of professionals learn a craft to whom she could refer clients and sell requisite designs and materials.

The History of Villa Bel-Ami

Built in 1996, the property at 2500 Cascadia Drive in Glendale, California was a simple, non-descript structure in the prestigious Chevy Chase Canyon, north of Los Angeles. Enveloped with magnificent vistas from every room, the home was a spec house that did not sell upon completion, and was leased to its first occupants to cover the original builder’s costs.

During this time, Ms. Tyler Kast had already been at the helm of JP Weaver for twenty years as its president, and sought a home in the area that she could take on as a personal project. Her longtime friend and realtor, Rick Barnes, had requested that they tour the property on Cascadia on many occasions, but much to his chagrin, Lenna repeatedly refused. She insisted that the seven mile distance to Cascadia Drive was “too far” from her home at the time.

After three years of searching for the perfect house for his client, Mr. Barnes insisted that his friend accompany him to the home, as he knew that her exhaustive three year search would end if she would only relent to tour 2500 Cascadia. From the moment Lenna stepped into the double entry doorway, she knew she had found the perfect blank canvas for her future masterpiece, high ceilings and views from every room. She exclaimed “Why didn’t you show it to me sooner???”

The project would turn out to be an endearing act of patience and love, as it took over 10 years to complete what Ms. Tyler Kast named Villa Bel-Ami, or “Dear Friend”, a French Baroque style residence fit for royalty.

Examples of Tyler Kast’s proclivity to beautification can be found in virtually every room of her former Glendale home, both on large and small scales. Here are the most prominent examples of her decorative style:

Lenna’s style of ornamental design is evident as soon as you arrive at the property’s wrought iron gate entrance, flanked by two large embellished stone columns, which leads to a sunken stone courtyard.

Several decorative treatments are viewable within the courtyard, including: 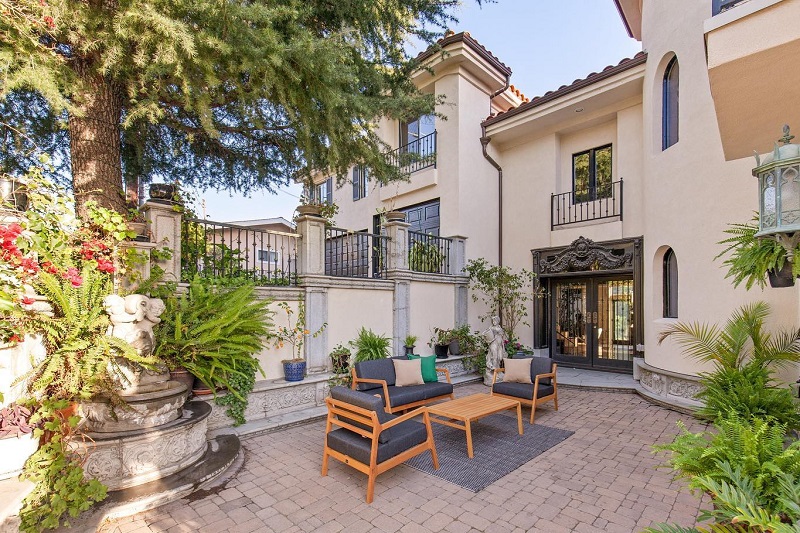 A tremendous amount of work went into transforming the ceiling into the largest piece of art of the home, which serves as a key feature of the main entrance area. Before highly detailed coffered tiles could be attached to the ceiling, the main beam needed to be re-centered. A coffered ceiling consists of recessed panels that are typically arranged in a grid. Though certainly decorative, coffered ceilings can also offer the added benefit of improved acoustics.

The final design of the foyer area creates a cathedral effect, where the eyes trace the stairway into a circular balcony, then up to the grand vaulted ceiling. 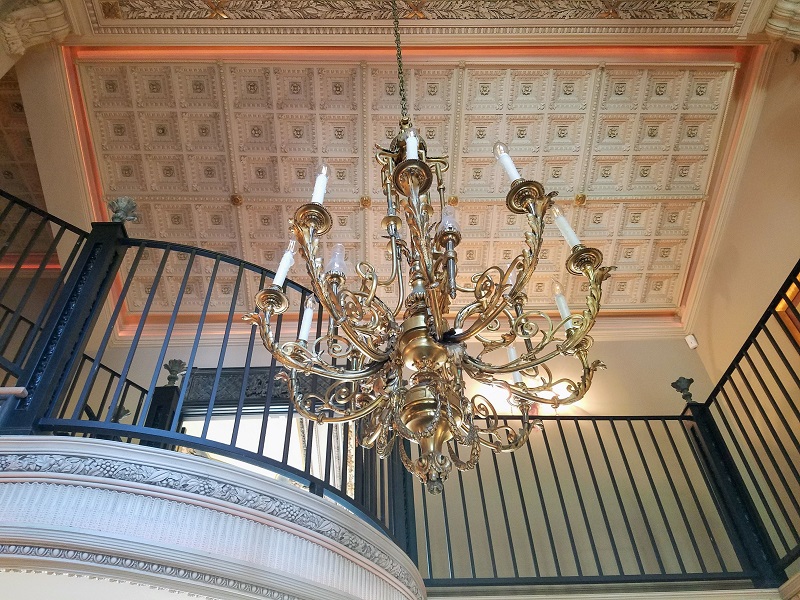 According to Rob Tyler, Lenna’s son and current president of JP Weaver, the powder room is one of the three most popular residential projects that JP Weaver encounters. In the case of Lenna’s first floor guest bathroom, this relatively small space packs more opulence per square foot than perhaps the entire house.

This one of a kind powder room is reminiscent of a seashell, as a beautifully decorated curved wall leads you towards the toilet on the right side, which has been subtly placed in a secondary space. 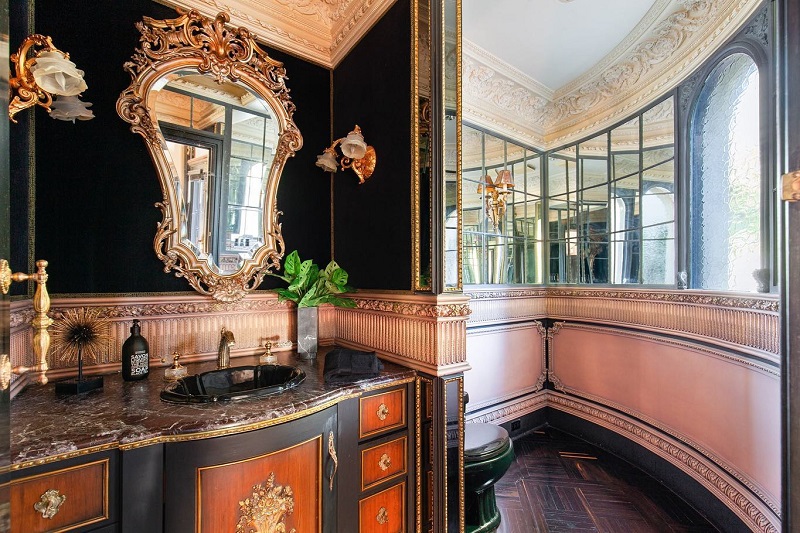 Use of Mirrors Throughout the Residence

One of Ms. Tyler Kast’s favorite elements was mirrors, with which she could deftly transform any foyer, room or staircase into a personal statement fit for the most lavish tastes.

Custom paneled mirrors can be found throughout her former Glendale home: 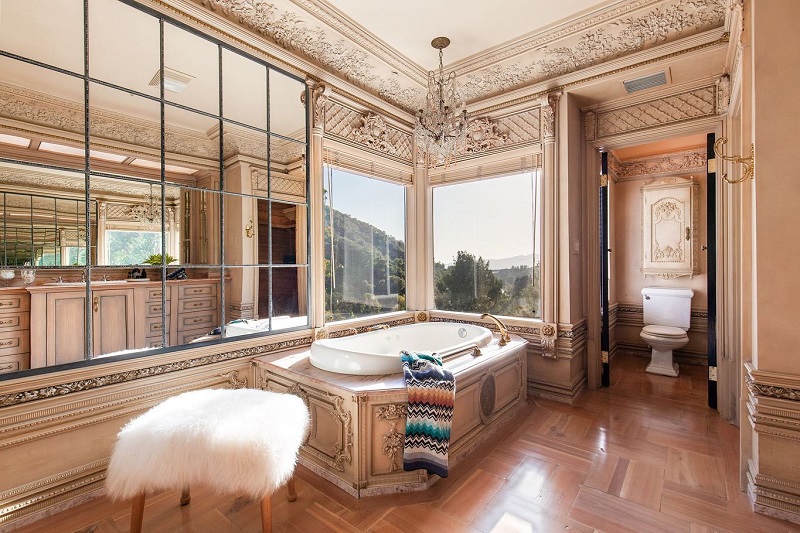 Perhaps our favorite decorative piece in the house are the two doors of the kitchen pantry closet. This has more to do with what they symbolize, as to their aesthetic ornateness or beauty.

To the untrained eye, one might assume that these were custom made doors imported from Europe. However, these are the original, simple doors that came with the spec built house, that were later embellished by Lenna. True to her long fascination with beautifying ordinary household items, you cannot get more ordinary than basic pantry doors. 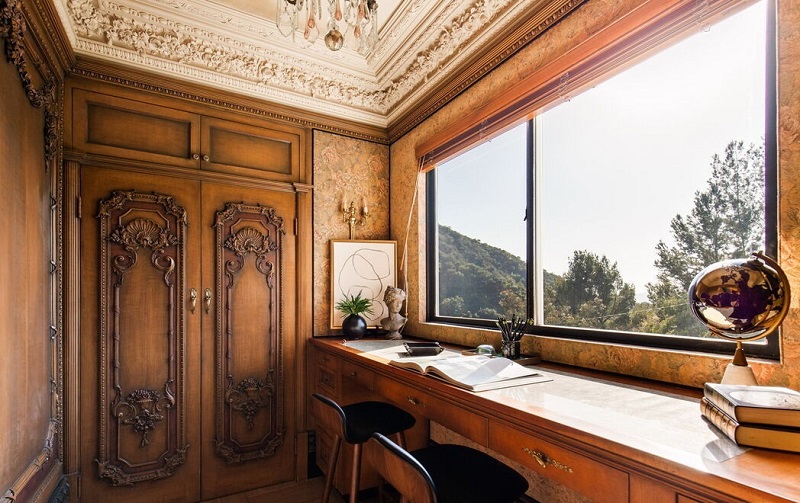 We hope that you found this article to be an inspiring example of how following your design instincts and interests can lead to surprising results – often life altering.

While researching Lenna, we could not help but wonder what may have driven her to be so captivated by ornamental design. Fortunately, we were able to get some perspective on this topic from her son, Rob Tyler. His theory is that his mother was likely influenced by her mother, who was a successful Hollywood seamstress during the golden years of the movie industry.

Throughout her life, Lenna always had cookie tins filled with buttons of all types, styles and sizes. Up until attending college, she never wore mass-produced attire, and treated clothing as something that could be improved upon, personalized and most importantly, made special.

Lenna Tyler Kast’s design career is an admirable example of how creative passion, combined with dogged determination, can overcome what you may lack at the beginning of your journey. We suspect that Lenna’s vision continually saw opportunities of what could be done that had not been done, while not being distracted by doubt or reasons to impede her success along the way.

Purgula would like to express sincere gratitude and appreciation to Rob Tyler, President of JP Weaver and Rick Barnes, Realtor, Real Estate One for their generous assistance with this article.

Purgula also appreciates the support provided by Jeremiah Vancans, the listing agent of this property, as well as Lauren Engel, the listing photographer.