The Kubly House in Pasadena, California was recently listed for sale for the first time since it was built in 1965.  Designed by the iconic Los Angeles-based modernist “architect”, Craig Ellwood, the home led us to discover many interesting facts about its provenance and its unique creator. Here’s what we learned.

Ellwood, although not formally trained as an architect, was long on ambition and skilled at self-promotion. Born in 1922 as Jon Nelson Burke in Clarendon, Texas, “Ellwood” created a persona and style that made him one of the most sought after architects of his day.

After serving in the US Army during World War II, Jon Nelson Burke returned to Los Angeles along with his brother, Cleve, and two friends from the war. The Burke Brothers together with the Marzicola Brothers, one of whom held a contractor’s license, started the Craig Ellwood firm, taking the name from the Lords and Ellwood liquor store, which was opposite their offices. Jon Burke later legally changed his name to Craig Ellwood.

The Burke-Marzicola venture failed, which prompted Ellwood to search for work in order to survive. Ever resourceful, Ellwood had been a part-time publicist for the Hollywood Bowl in 1947 and blessed with good looks, naturally found work in front of the camera as a model. 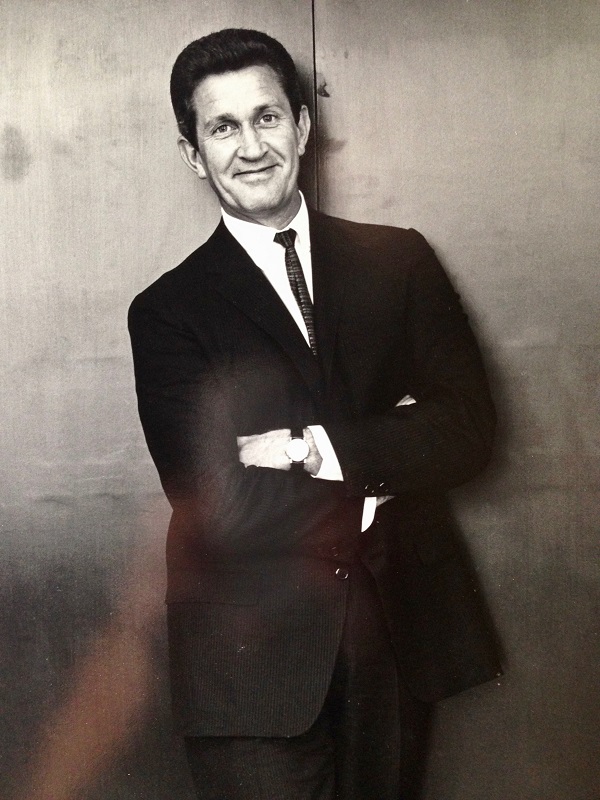 Ellwood’s unique life and daring personality reads like a Hollywood screenplay. Here is a representative sampling of how his legacy has been described:

Still interested in the design of homes, Ellwood was successful in landing a job as a construction cost estimator with Jack Cofer, a principal at modern-house builders Lamport, Cofer & Salzman, in Los Angeles. With five years of instruction from UCLA extension classes and the job at Lamport, Cofer & Salzman, Ellwood felt equipped with the knowledge and skills to begin his own formal designs of California modernist residences.

Craig Ellwood Design was a success, as Ellwood and his visionary designs received praise from clients and trade publications, which eventually helped to garner him a steady flow of work of both commercial and residential commissions. Several influential publications, such as Arts & Architecture, hailed Ellwood’s work by including his homes in their iconic Case Study House series.

Lauded as the “California Mies Van der Rohe”, after the famous German modernist architect, Ellwood was the consummate self-promotor in his Lamborghini –  with a license plate that read ‘VROOM’ – and dashingly good looks. Although he was disparaged by formally-trained architects, clients loved him, and his business thrived as he became one of the most influential architects of his era.

Ellwood’s Miesian style can be summed up as “linear and crisp” constructions of steel and glass that were oriented toward the outdoors and nature.

The Kubly House was designed in 1965 by Ellwood as the Pasadena, California residence for Don Kubly, who would later become the President of ArtCenter College of Design, and his wife Sally. The Kubly’s met while attending the school, from which they both graduated.

In later years, the couple played an instrumental role in the ArtCenter’s move to Pasadena, as well as the selection of Craig Ellwood Associates to design the primary building of its Hillside Campus.

Kubly hired Ellwood to design and build his home, primarily for his accurate and transparent approach to cost estimations, in addition to his “less-is-more” minimalist style. Kubly’s opinion of Ellwood was captured in a 2010 interview:

“I admired Ellwood’s work … He had terrific taste, but he also was very practical. He was an easy guy to work with designing our own house, and we thought that he would be perfect for what Art Center wanted to do”.

The home is in the classic mid-century Miesian style, as it is an elevated, transparent horizontal rectangular box with floor-to-ceiling windows. Though Ellwood preferred working with steel, the home was built using a wooden frame to meet budgetary requirements.

The interior of the home is laid out with three functional areas in mind: the kitchen as the center core, which divides the living areas from the private bedrooms, situated at the two far ends of the structure. 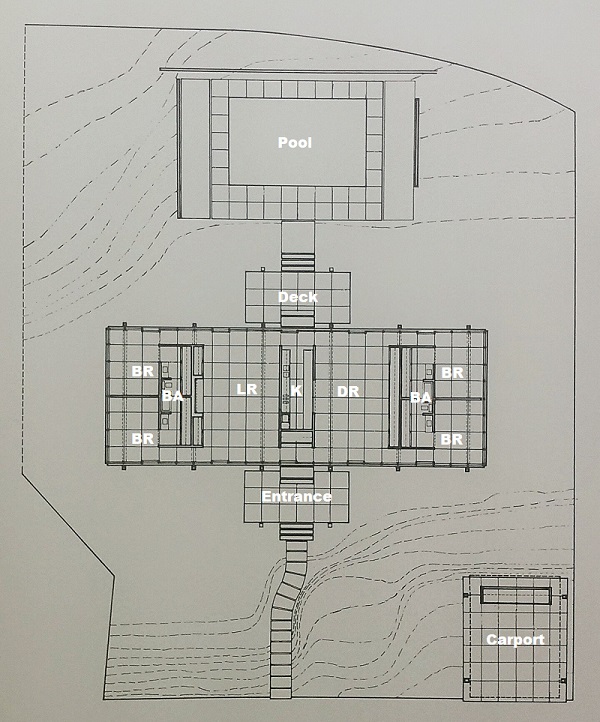 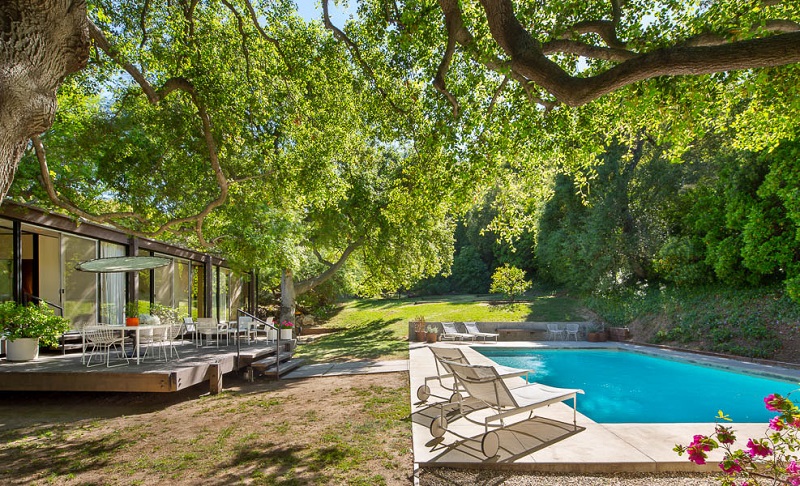 By far the most distinct trademark design feature of the Kubly House is the elevated, transparent horizontal structure. Other notable design features representative of Ellwood’s style include: 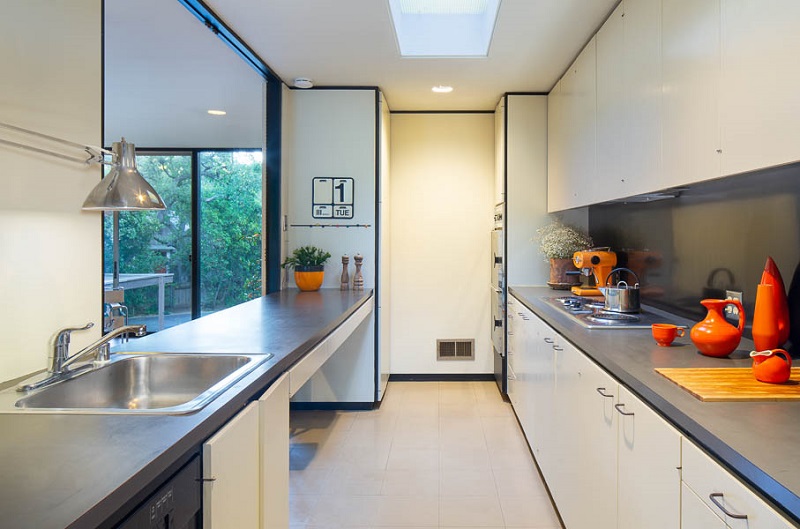 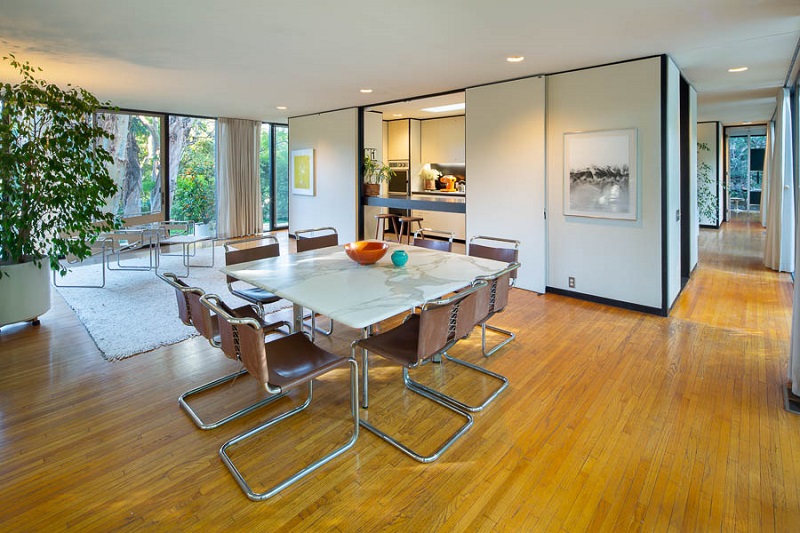 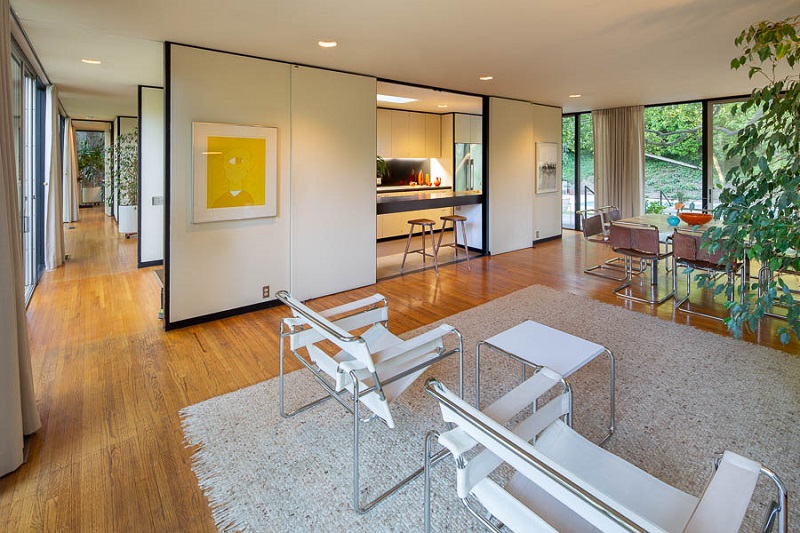 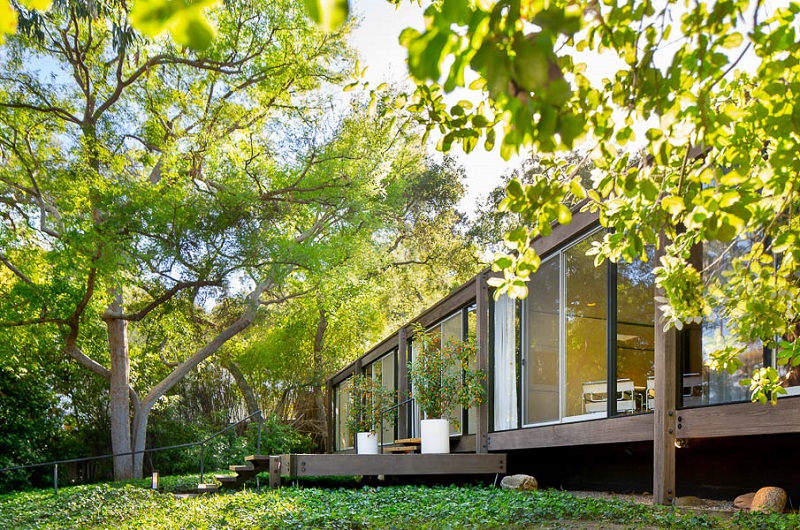 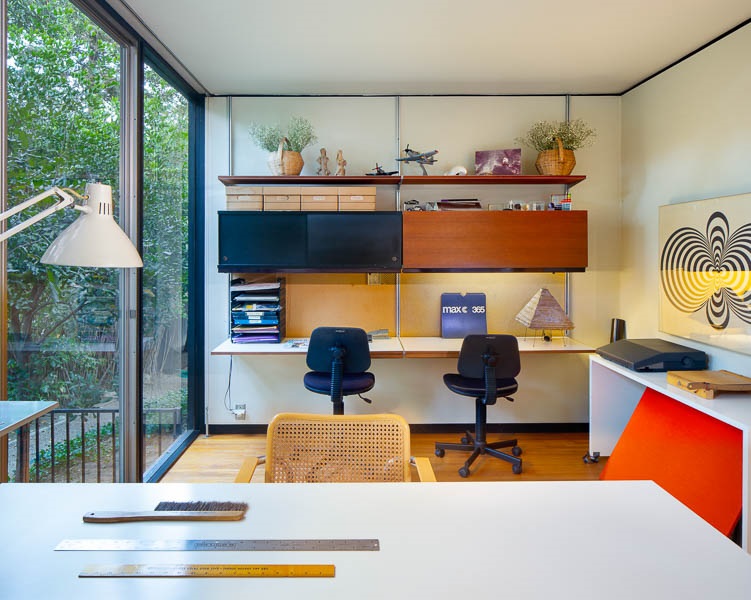