If You Own a Fireplace, You’ll Want to Read This 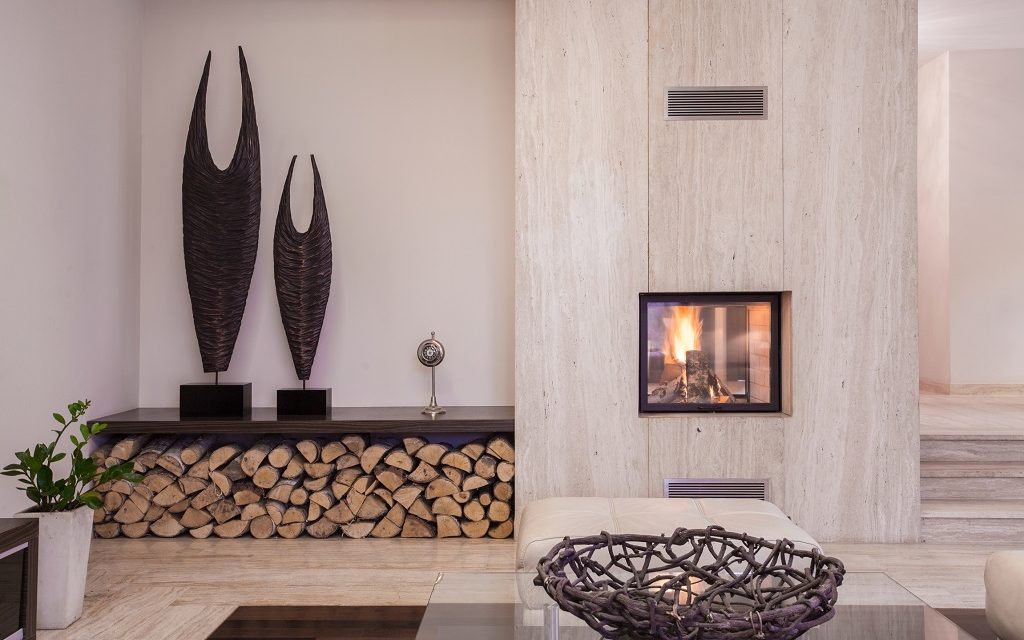 While researching Chimney King’s Chimney Crown used in this year’s The New American Remodel, we had the pleasure of speaking with Derek Lidstrom, the President and Founder of Chimney King. This article stems from our enlightening conversation, as a means to educate homeowners on chimney fires, proper chimney care, the risks of prefabricated fireplaces and the importance of well-fitting, quality chimney shrouds.

Colder winter months beckon us to the warmth and glow of a well-lit fireplace that has probably lain dormant for several months. Oddly, in warmer climates, such as that found in Southern California, fireplaces are hardly ever used, but you wouldn’t want to buy a new home without one.

No matter how cold or mild your winter season may be, starting up the fireplace after a long period can create a potential unforeseen hazard – a chimney fire.

Chimney fires are one of the most dangerous events that a homeowner may encounter and can spread quickly, causing extensive damage to walls, ceilings, attics, framing and interiors furnishings. In many cases a chimney fire can lead to total devastation of a home’s structure, so the best way to avoid a chimney fire is to prevent one from happening.

The pointers contained in this article are especially pertinent to homeowners who may consider themselves to be infrequent users of their fireplaces. Dangerous situations can arise quickly from a single use of a fireplace that has been dormant for many months or years.

Do not be lulled into a false sense of security that low-usage equates to a high-level of safety. Underlying risks can also stem from factors unrelated to extensive fireplace usage, such as water and ice damage that can lead to cracks, rust and infiltration by wildlife that can create flammable blockages and tinder material.

Homeowners that live in fire-prone areas also need to heed the dangers of flying embers making their way into an improperly capped or poorly maintained chimney.

Lastly, risk of fire can escalate dramatically when usage patterns increase due to an unusually cold period. This type of situation can find homeowners pushing the limits of their fireplace systems, without being properly prepared to mitigate potential hazards.

All of these risks are interrelated, so thorough maintenance and professional inspections are critical to reduce the dangers that these situations present.

Perhaps the most common cause of a chimney fire is inadequate maintenance that leads to a dangerous buildup of creosote, a black or brown residue within the chimney walls. Creosote is formed when the combustion of wood results in unburned wood particles, which are cooled as smoke passes through the chimney, leaving a condensation on the flue lining.

This condensation can be crusty, tar-like, sticky, shiny, drippy or hardened and is highly corrosive to the flue liner and highly combustible and flammable to the entire chimney and subsequent home.

Creosote and soot buildup, need to be removed proactively from the chimney on a consistent basis. If the temperature within the flue is high enough, the creosote lined chimney walls could ignite, even if you are not using your fireplace.

This is possible, for example, if an errant ember, from a nearby fire (man-made, accidental or wild), finds its way into your dirty chimney. Burning embers can travel up to five miles and enter a neighboring chimney through a poorly designed chimney shroud or cap. Furthermore, if you have not performed annual inspections of your chimney, you may be unaware of cracks or rust in the flue liner, rusted chimney caps or other structural deficiencies in the masonry that can allow high temperatures, embers and sparks to escape from the chamber of the chimney to reach combustible areas that will result in a structure fire. Undetected and untreated water damage is a common cause of cracks.

Prefabricated chimney systems are also susceptible to rusting when exposed to salt air. Lifespans for prefab systems can be cut by as much as 50% from 30 years to 15 years, in communities near the ocean.

Chimney openings are vulnerable to external elements such as rain, salt air, and embers from neighboring fires, and wildlife nests. Without proper protection, chimney flues are at risk from a wide range of natural threats.

The Risks of Prefabricated Fireplaces

Pre-fabricated fireplaces can present a unique set of risks for unsuspecting homeowners, as many may believe that their fireplace is a masonry unit, simply because there is stone in the hearth and around the mantle.

Pre-fabricated fireplaces are not the same as well-built masonry (brick or stone) fireplaces that are built onsite by a qualified stonemason. Factory-built or “prefabs” are built from factory sheets of metal or refractory sheets made of cement, internal to the firebox that appear to look like bricks or stone.

Prefabs are also referred to as “decorative”, “occasional” or “recreational” appliances, as they are NOT intended to heat an entire household in the same manner that a stone masonry fireplace can. Factory fireplaces cannot have very big or hot fires, as this will lead to cracking of the refractory panels in the back of the firebox, which is the main protection between the fire and combustible framing of the home.

What is a Chimney Shroud?

Chimney shrouds are decorative metal housings that sit atop the chimney to provide a more polished aesthetic appeal to improve the professional look of a home’s roofline.

Most importantly, a well built, Underwriters Laboratories (UL) labeled and listed chimney shroud will guard the home against rain, unwanted critters and fires, as embers and sparks are deflected by the protective mesh.

Many chimney fire issues are the direct result of an ill-fitting, poorly designed or uncapped shroud that can result in nesting birds and rodents, such as squirrels, mice, rats and raccoons making their home atop your chimney. The nesting materials such as straw, fur, feathers, feces, leaves and dry sticks are the perfect tinder for causing flammable blockage, combined with a dirty flue that can lead to a chimney fire. Historic Cases That Have Led to Building & Fire Code Changes

During the 1970’s oil crisis in the US, people overused and over stacked their pre-fabricated fireplaces, hoping to lower the cost of heating their homes. This change in usage increased the number of chimney fires and damage that was largely attributable to “off-label use”. Pre-fabricated fireplaces were never intended to be whole-house heating workhorses.

Another historic event involved a series of chimney fires caused by improper chimney shroud installations atop prefab fireplaces during the 1989-90 winter season in the California towns of Moorpark and Camarillo.

According to an inspection report, these fires appeared to be the result of two interrelated factors:

The faulty shrouds forced heat and soot back into the chimneys, which dried the outer wood frames making them flammable over time. The report concluded that future installations of chimney shrouds must include UL labeled and listed attachments to a listed fireplace assembly system.

In subsequent years, the International Fire Code 603.6.3 mandated the removal of every shroud in the US atop a prefab fireplace that is not bearing a UL listing and a visible, genuine UL label.

Since these findings, an estimated 10 million homes have been cited as having unsafe chimney shrouds atop a pre-fabricated chimney.

How to Protect Your Home & Prevent Chimney Fires

Have Your Chimney Inspected by a Professional Annually

This inspection should include the hearth, flue lining and the overall condition and health and structure of the masonry. Even if a chimney has not been used extensively for a number of years, it is always important to have it inspected before you light your next fire.

Even without usage, the weather and external wildlife can impact the safety of your chimney, flue and shroud, without your knowledge.

Although sweeping of the hearth should be performed after each use, professionals disagree on how often the chimney and flue should be swept and inspected. Obviously, the more you use your fireplace the more maintenance is required.

In colder climates where wood burning stoves and fireplaces are used frequently, professional chimneysweepers suggest a good cleaning every five or six weeks. For warmer climates where the fireplace is merely a status symbol used maybe once or twice during the holidays, an annual cleaning and inspection would suffice.

Better yet, a simple rule of thumb: sweep out the flue after every chord-and-a-half of wood, depending on the dampness of the wood used.

Wet or green, uncured wood creates high amounts of creosote as it burns, due to the moisture content that remains in the wood. When the creosote catches on fire this will lead to a chimney fire. Furthermore, wood burns 20% less efficiently when uncured and creates more smoke than seasoned or dry wood.

Cap Your Chimney with a UL Listed and Labeled Shroud

Know the difference between counterfeit labels on shrouds and caps and make sure that any shroud protecting your chimneys termination cap is genuinely UL labeled and listed.

What to Do If You Have a Chimney Fire

Sparks, flames, glowing embers and dark dense smoke should never be emanating from the top of a chimney. If you see any of these signs, you have a chimney fire and need to take steps to cause the minimum amount of damage to property and lives.

Likewise if you are indoors, and begin to hear loud cracking or popping noises from the flue accompanied by a strong, smoky smell, chances are you have a chimney fire.

1. Evacuate the Home and Call 911 or Your local Fire Department

Do not attempt to throw water on a chimney fire as the result can be disastrous. Your priority should be life safety, make sure everyone is completely evacuated and call the fire department from outside the home.

2. Shut Off Flue Dampers and All Air Vents

If you are near the fireplace at the time and the fire is small, and you are able to shut off all airflow to the fire, by closing dampers and vents, this will help reduce the amount of oxygen fueling the fire and reduce its intensity.

3. Move Furniture Away From Fireplace

It is never a good decorating idea to have flammable furnishings within close approximation to a fireplace hearth. If the fire is small and you are able, move any flammable objects out of the vicinity of the fireplace to minimize fire damage.

4. Suppress Flames with a Fire Extinguisher or Fire Suppressant

Never use water to extinguish a fireplace fire as this will create steam burns and may cause cracking and other damage to the masonry due to thermal shock. Water can also lead to excessive smoke which can lead to smoke inhalation injuries or worse unconsciousness.

5. Wait for the Fire Department

When there is nothing more you can safely do, simply wait for the fire department to arrive at a safe distance out of harm’s way.

What Not to Burn in Your Fireplace

The safe rule of thumb for wood burning fireplaces is to burn seasoned wood only. Anything else should not be considered. Here are specific examples of what not to burn to make this point as clear as possible:

Safety Products for Your Chimney